How Long Does it Take?

If you work in the arts you certainly know that's everyone's favorite question. I've been working on a design for several years now and I'm quite glad I haven't kept track of the hours. As I heard clothing designer Anita Luvera Mayer say recently, "I just don't care how long it takes me." 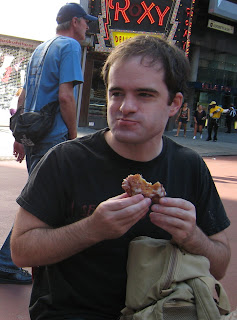 This portrait idea began with a photo I took in New York City. I was interested in the expression of both the face and the hands of the man as the he held the donut.  Although I knew I wanted to work with this image I did not have a clear path and struggled with the skills I needed to understand the position of the figure. It was hard to draw and so I experimented. 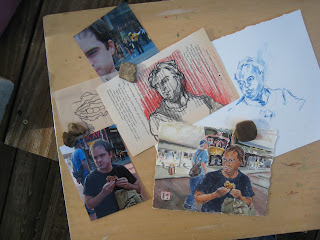 I recently returned to the problem because I had a warp I needed to finish. The sample is a study of the right eye woven 'to size' for the final piece. I enjoyed the process so much (sorting values, maintaining the expression), I decided to do a Coptic inspired version of the same sample on the same warp before cutting.


This idea is a long way from winding a warp and selecting wefts, but the recent progress is exciting. It's validating to see my hard work in drawing pay off.

Just don't ask me how many hours it's taken.

p.s. How did I get such a clutter of frame looms with unfinished warps? I wanted to cut off my Wedge Weave Woman but feel compelled to finish that warp, this time with "Too Many Bananas". Wedge weave bananas seem possible, don't they?
Posted by Ruth Manning at 11:13 AM 2 comments: